There are many places on the great mother earth have incredible landscape and the one in Iceland is one of the most exotic. Covered in lava, the island is like a naked beauty and the viewers wouldn’t miss a thing. If you are to experience the amazingness of the island don’t miss the highlands. Spectacular sceneries of rivers, lakes, geysers, ice, and glaciers. It is a secluded yet beautiful area with a proximity to the comparatively popular Golden Circle.

It is the time of the year that I hear my friend talking about visiting Iceland again, and overall the years they all fell in love with the magical island (and the feeling was mutual :P). I visited Iceland in August and the best thing about visiting Iceland in summer (except missing the chance to catch the northern lights) was that the sun (almost) never goes down. So, we didn’t waste any sunlight and signed up for a whole-day excursion from Reykjavik that covers the highlands and the Golden Circle. The trip started at noon time and returned to the city around midnight. I had a great time exploring the area as the tour was kind of “comprehensive”. During the day, the tour guide was driving us in the secluded highlands. As I gazed out the car windows there was the uncovered no man’s land without boundaries. Afterward, we switched car and we visited three of the most popular attractions in Iceland – Þingvellir National Park, Gullfoss waterfall, and Geysir hot spring area.

The tour started at 12:30 in the city of Reykjavik. A driver transferred us to Deildartunguhver, a geothermal area with hot springs (the water emerges to the surface “boiling” at 97 degrees) and the actual starting point of the tour. There, we spent a couple of minutes walking around the area, took a toilet break, and then hopped on to our 4×4!

We had quite a lot of places to see for the day. Our first stop was the Hraunfossar & Barnafoss – they are not one of the most famous or dramatic waterfalls that I listed in the “Dramatic Waterfalls, Iceland” since Hraunfossar’s height is merely 12 meters (41 feet). Though neither considerable in height or volume, Hraunfossar still has its uniqueness in terms of how it’s formed. The waterfall is a series of waterfalls split but a large volume of water and hundreds of water streams running along the edge of the Hallmundar lava field, with a distance of 900 meters long. I saw quite a lot of waterfalls in Iceland and may have difficulty remembering which is which back home, but I remembered this waterfall just fine once I saw the picture.

Then we headed north for our main course of the day. once we entered the Hallmundarhraun lava field, the 4×4 was running on rocks. If you type “Hallmundarhraun” in Google Map, you don’t see any roads. That’s where we were at – the no man’s land.

Hallmundarhraun lava field was formed in giant eruption close to the Langjökull glacier around the year 930 and is 8-9 cubic kilometers. We kept heading up to the top of the field through rocks and finally reached Langjökull, the second largest glacier in Iceland where the water of the Harunfossar waterfalls came from. Once we got out of the car, 1260 meter above sea level, it felt like we just arrived at the North Pole. Strong winds were coming in all directions and water and ice were hitting our faces mercilessly. I bet many on the tour weren’t prepared for this and it was hard to stand still for a minute. I tried to get closer to the glacier and then I saw snowmobiles and dog sleds in the ice from afar.

For the second half of the day trip, we visited the Golden Circle, which covers the Þingvellir National Park, Gullfoss waterfall, and Geysir hot spring area.

The Þingvellir National Park (or Thingvellir) is part of the tectonic plate boundaries of the Mid-Atlantic Ridge, which extend the length of the Atlantic from north to south. The ridge is a line of underwater volcanoes and where the new oceanic crust is formed. It stretches from the South Atlantic all the way to Iceland and rises above sea level. The ridge is an awesome sight, and visitors can walk through this dramatic boundary on earth with the North American crustal plate on the left, and the European plate on the right. 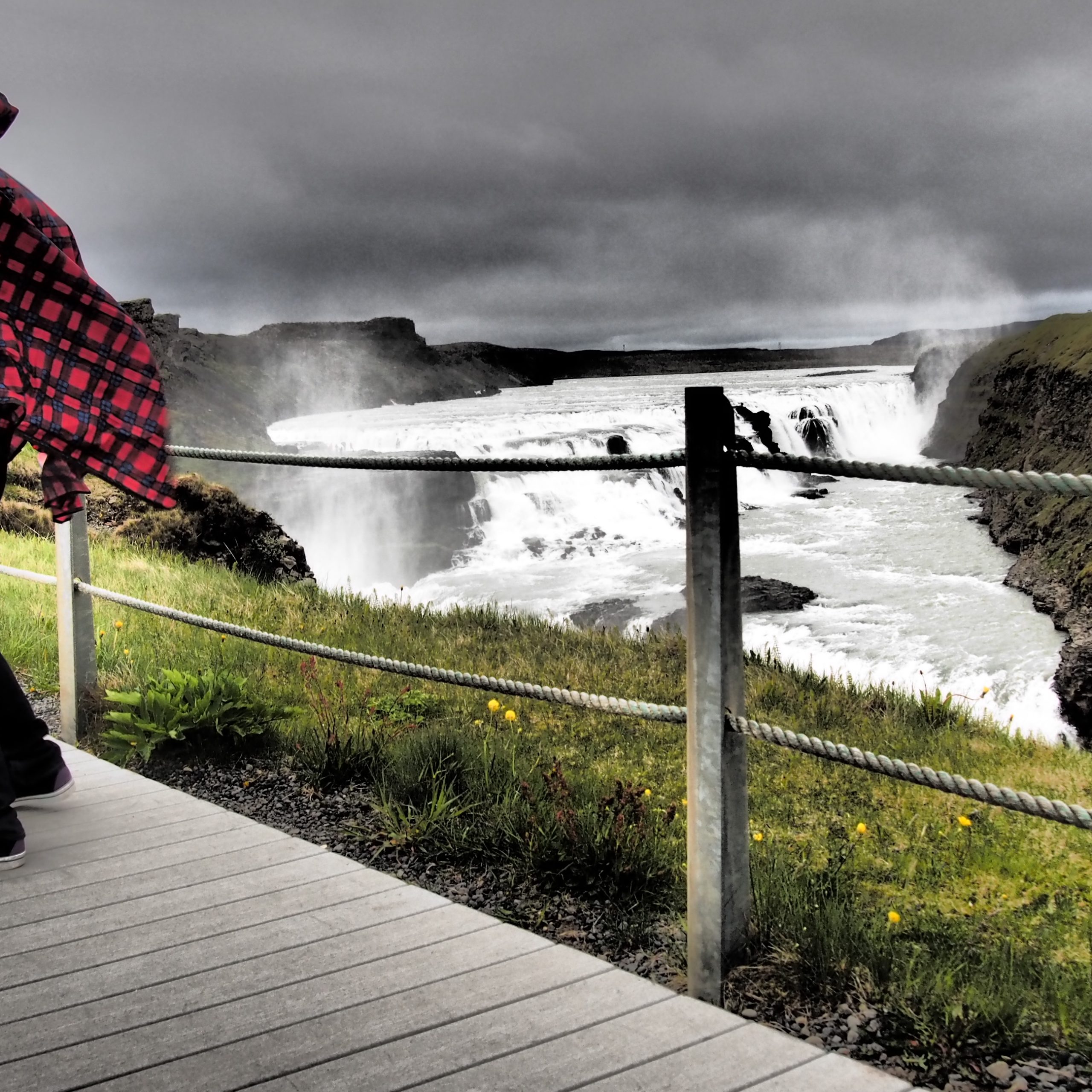 Looking at the waterfall from the top on a cliff, it makes a 90-degree turn before hitting forcefully into the narrow slit, which makes the fall so distinct from the others and also mysterious. Gullfoss means “the golden waterfall,” has some fascinating theories about how this name came about. It’s likely that the waterfall was named Golden because of the golden evening hue gives colors to the water.

Another theory was based on the travel journal of Sveinn Pálsson, an Iceland physician in the early 1800s. According to his diary, a farmer had plenty of gold and could not bear the thought of someone else taking his wealth after his death, and so he hid the gold in a chest and threw it into the waterfall – and that’s how the waterfall was named.

The Great Geyser is in southwestern Iceland and I was told it is not erupting as frequent and powerful as it used to be. But still, visitors should be able to see an erupting geyser every 5-10 minute. The problem is, how to get the camera ready and capture the moment as the eruption was unpredictable ?. After our visit to the Geyser (and some other nice waterfalls as an “extra” of the tour), we headed back to the capital city of the island, just in time to catch a magnificent sunset in the summertime at midnight, before it would rise again pretty soon at 3 am in the morning.

Country Overview Iceland is a Nordic Island of sharp contrasts. Located in the Atlantic…

Jökulsárlón Glacial Lake: On the Tip of Your Tongue

As a city boy, ‘ traveling’ is getting out of the concrete jungle to…

Dec 8 · 3 min read
Holy guacamole! You should check in on some of those fields below.