Some love a road trip; some think it’s boring. Well, a road trip in Iceland is anything but. The dramatic landscape covered by glaciers and lava that is truly one of a kind. It’s so unique as if the visitors landed on another planet; even extraterrestrial might find it impressive. No wonder the magnificent sceneries of Iceland were frequently featured in music videos, movies and photo albums from singers, filmmakers, or photographer all over the world – lately the country has gained popularity in wedding photography business as well! Indeed, you cannot take a bad photo when you are in Iceland – 80% of the country is inhabited, and the landscape offers photographers the perfect backdrop for whoever is in the picture.

For those who don’t drive, consider taking a day tour to the outskirt of the city of Reykjavik and enjoy the scenery with a camera in hand. Looking out from the vehicle window, passengers could see rocks, volcanoes, ice, and mosses… After spending days in South Iceland, I had strange feelings seeing the nature scene after my return to Europe because Iceland’s lava fields are covered with few trees but lots of ferns or mosses.

Another unique feature in Iceland is the waterfalls. Not only they are stunning to look at, but also many of them have fascinating folk mythologies. Waterfalls, in Icelandic, are ‘foss’. Like Barnafoss. It is a wide but short waterfall on the river Hvítá that related to many, weirdly, dark and spooky Icelandic folklore. The waterfall could be seen on the way to the Highland Road before seeing the ice caps.

The five most famous waterfalls in Iceland are probably the Seljalandsfoss, Skógafoss, Gullfoss, Dettifoss, and Goðafoss. Seljalandsfoss and Skógafoss are in South Iceland and could be seen on the way to the Jökulsárlón Glacial Lagoon. Gullfoss is part of the Golden Circle tour, and Dettifoss and Goðafoss are located in the north-eastern regions.

I have seen the two amazing waterfalls as I joined the “South Coast & Jökulsárlón Glacial Lagoon” day tour from Reykjavik – Skógafoss and Seljalandsfoss.

Skógafoss is located on the Skógá River in the south of Iceland at the cliffs of the former coastline. The waterfall is 60 meters in height and is one of the biggest in the country with a width of 25 meters. There’s a campsite nearby the waterfall, and it’s possible to climb the cliff on the side and view the waterfall from above!

The waterfall is also a set of the legend of ‘Þrasi Þórólfsson’s chest of gold’, of which the first Viking settler, Þrasi Þórólfsson, hid a treasure chest behind the waterfall and later the chest was found by the successors. Interestingly, the successors could only retrieve a ring on the chest before the treasure disappeared again somehow. The ring is now displayed in a Museum.

Visitors could get closed at the bottom of the waterfall, and a rainbow (or even double rainbows) could always be seen on a sunny day. 🙂

Seljalandsfoss is tough to pronounce. 😛 The waterfall is situated between Selfoss and Skógafoss, and it’s my favorite. The best time viewing the waterfall would probably be sunset. The waterfall is 60 meters in height and a bit narrower than Skógafoss. I like it because it is possible for visitors to walk behind the waterfall (but yeah, be prepared to get wet)! I still remember I was blown away, drenched all over, looking back the amazing sunset through the waterfall at midnight (yes, the sunset is at midnight in summer); Flipping through the photos of Seljalandsfoss at home they are like a Chinese landscape painting with ink splattered all over the dramatic landscape… 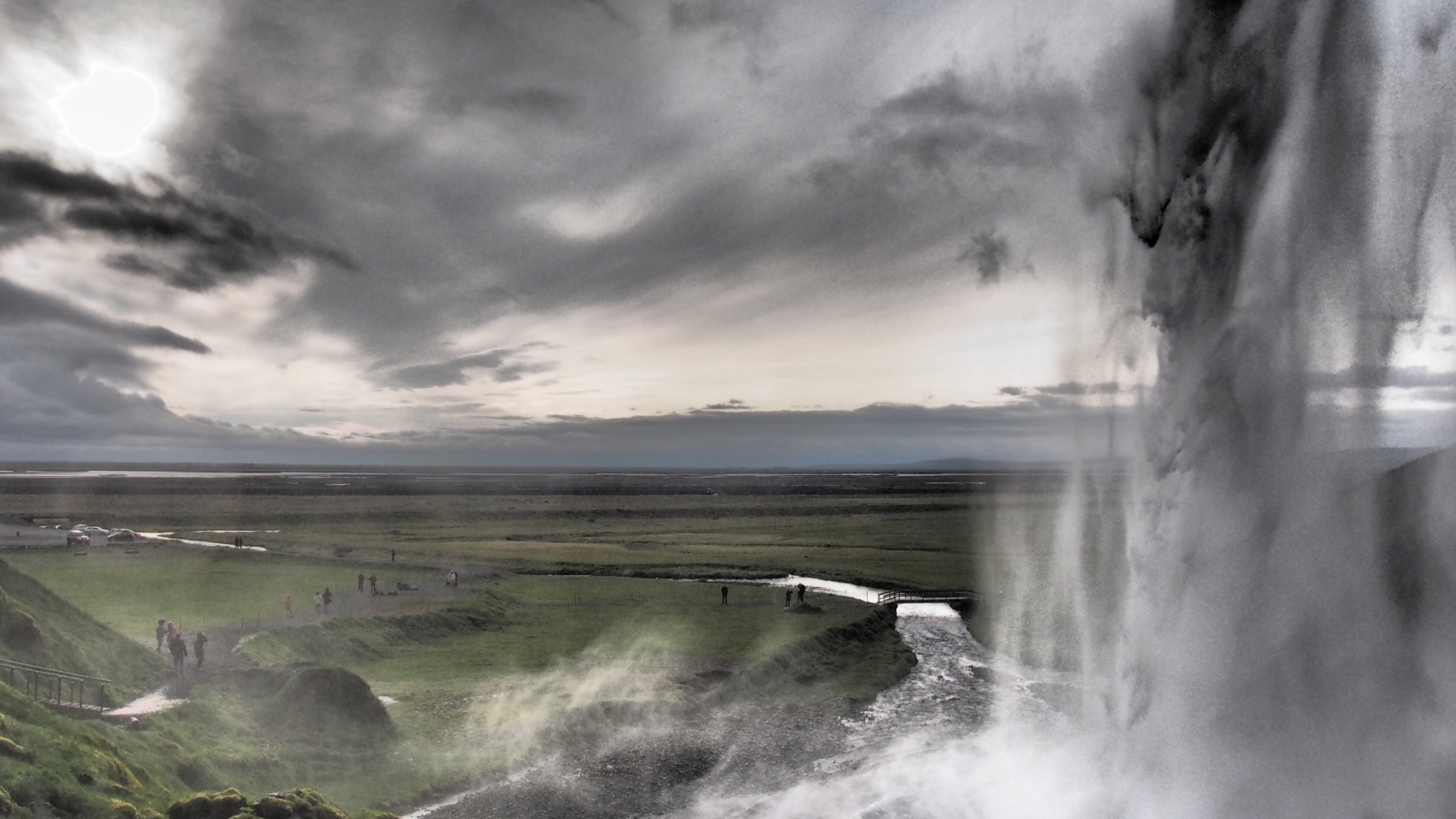 Gullfoss is part of the Golden Circle tour, and it’s probably the most well-known and most visited waterfall in Iceland due to it’s proximity to the Þingvellir national park and geysers Geysir and Strokkur.

Looking at the waterfall from the top on a cliff, it makes a 90-degree turn before hitting forcefully into the narrow slit, which makes the fall so distinct from the others and also mysterious. Gullfoss means “the golden waterfall,” has some fascinating theories about how this name came about. It’s likely that the waterfall was named Golden because of the golden evening hue gives colors to the water.

Another theory was based on the travel journal of Sveinn Pálsson, an Iceland physician in the early 1800s. According to his diary, a farmer had plenty of gold and could not bear the thought of someone else taking his wealth after his death, and so he hid the gold in a chest and threw it into the waterfall – and that’s how the waterfall was named.

In the Vatnajökull National Park in Northeast Iceland, the Dettifoss is the most powerful waterfall in Europe regarding volume. The waterfall is 100 meters wide and has an average water flow of 193 cubic meters per second! Like many other waterfalls in the country, visitors could get close to the waterfall on both sides. The sound of the waterfall was deafening even from a distance, and the drop makes the surrounding rocks vibrate and the vibration could be felt touching by hand.

The Goðafoss is an Icelandic version of mini-Niagara Falls. It is located in the Bárðardalur district of North-Central Iceland beginning of the Sprengisandur highland road. Water falling from the Skjálfandafljót river at 12 meters in height and over 30 meters in width, it is one of the most photogenic waterfalls in Iceland with its dark, horseshoe-shaped canyon washed over by white silky water… it is outstanding.

Goðafoss, in Icelandic it means “The waterfall of the gods.” The name came from yet another dark Icelandic folklore that about 1 thousand years ago, the lawmaker Þorgeir Ljósvetningagoði threw his statues of the Norse gods into the waterfall after his conversion to Christianity.

Country Overview Iceland is a Nordic Island of sharp contrasts. Located in the Atlantic…

Jökulsárlón Glacial Lake: On the Tip of Your Tongue

As a city boy, ‘ traveling’ is getting out of the concrete jungle to…

Dec 8 · 3 min read
Holy guacamole! You should check in on some of those fields below.