My impression to Scotland was just the same with everyone else. Men wear a Scottish skirt, weird Scottish cuisine, the windpipes, red hair, and the Scottish accent… I may have heard a bit more about the spectacular landscape and historic castles, but I didn’t know anything more than that. Since I went, I finally had a bit better understanding of the region’s history and culture and I found it fascinating.

The Scottish Highlands is an extraordinarily unique existence. It is not blessed with natural resources. It is filled with a solid culture and history. Composed of ancient, scattered highlands, rocks were mold by numerous streams and glaciers and shaped to a stunningly beautiful landscape that shakes your core.

As the car left Edinburgh and passed iconic Fourth Bridge, we were starting to move away from the Scottish Lowlands and heading to the Highlands in the north. The Highlands and the Lowlands are culturally diverged from the later Middle Ages into the modern period, while the Scottish Gaelic was replaced throughout most of the Lowlands. Most cities of Scotland are located in the Lowlands: Stirling, Glasgow, Dundee, Aberdeen, and Edinburgh. The Highlands, on the other hand, is a historic region that is sparsely populated and filled with spectacular high mountain ranges, and deep and mystical lochs (a Scottish Gaelic term for lakes). There, is also where old castles stand silently in the wilderness overlooking the peaceful wildlife and withstanding the dramatic and ever-changing weather.

There is a lot to see and do in the Highlands. Highlights are Loch Ness (and Inverness), the Isle of Skye (Neist Point, and Quiraing), many castles, Callander, and Glencoe. Although I have yet made it to the legendary Isle of Skye. I was deeply impressed by my visit of Loch Ness and Glencoe when I was in Edinburgh, and I can’t wait to go back to Scotland and visit other places!

The cathedral is an important crossing point on the River Tay. Dunkeld was once the ecclesiastical capital of Scotland. For more than a thousand years this has been a place of Christian worship. The Dunkeld Cathedral is considered to be one of the most picturesque cathedrals in Europe, and it has a strong tie with the Irish nobleman, priest, and missionary, Columba. Columba traveled widely in Scotland, including Dunkeld, where became the center of the church in Scotland when relics of St Columba were brought to Dunkeld for safekeeping during the Viking raids of the 9th century.

The monastic church became a cathedral in 1127 when King David I established a system of church government based on bishops and dioceses in line with the Church of Rome. The Cathedral has mixed Gothic and Norman architectural styles, and it was richly decorated in the late middle ages. The stained glass of the East window was impressive!

Nearby Dunkeld and Birnam are the Hermitage. It is a pleasure ground and one of the oldest tourist attractions in Scotland. Stepping into the Hermitage, I was following in the footsteps of Wordsworth, Turner, Mendelssohn and countless thousands of others. The Hermitage was originally an extension to the landscaped pleasure grounds of Dunkeld House. Good soil and sheltered conditions have allowed the plantation to grow into giants since it was planted in 1920. The cathedral-like groves of the Hermitage provide a fitting memorial to past generations of foresters.

Discover the Pitlochry Paths Network which links Pitlochry with the peaceful settlements of Killiecrankie, Moulin, and Strathtay using signposted paths, tracks, and quiet roads. The area was stunning along banks of lochs, and rivers. There are several paths in the region for visitors to choose from. Like the Bealach or Clunie Paths, which pass through high open moorlands; or Craig Fonvuick and Craigower Paths, which pass through steep paths in the lower ground. The Black Spout Wood Waterfall is a great site located on the Edradour Path!

If you are not up for a walk along the hiking trails, visit the Pitlochry Dam, or enjoy a lovely lunch or scone in bakeries in town~ 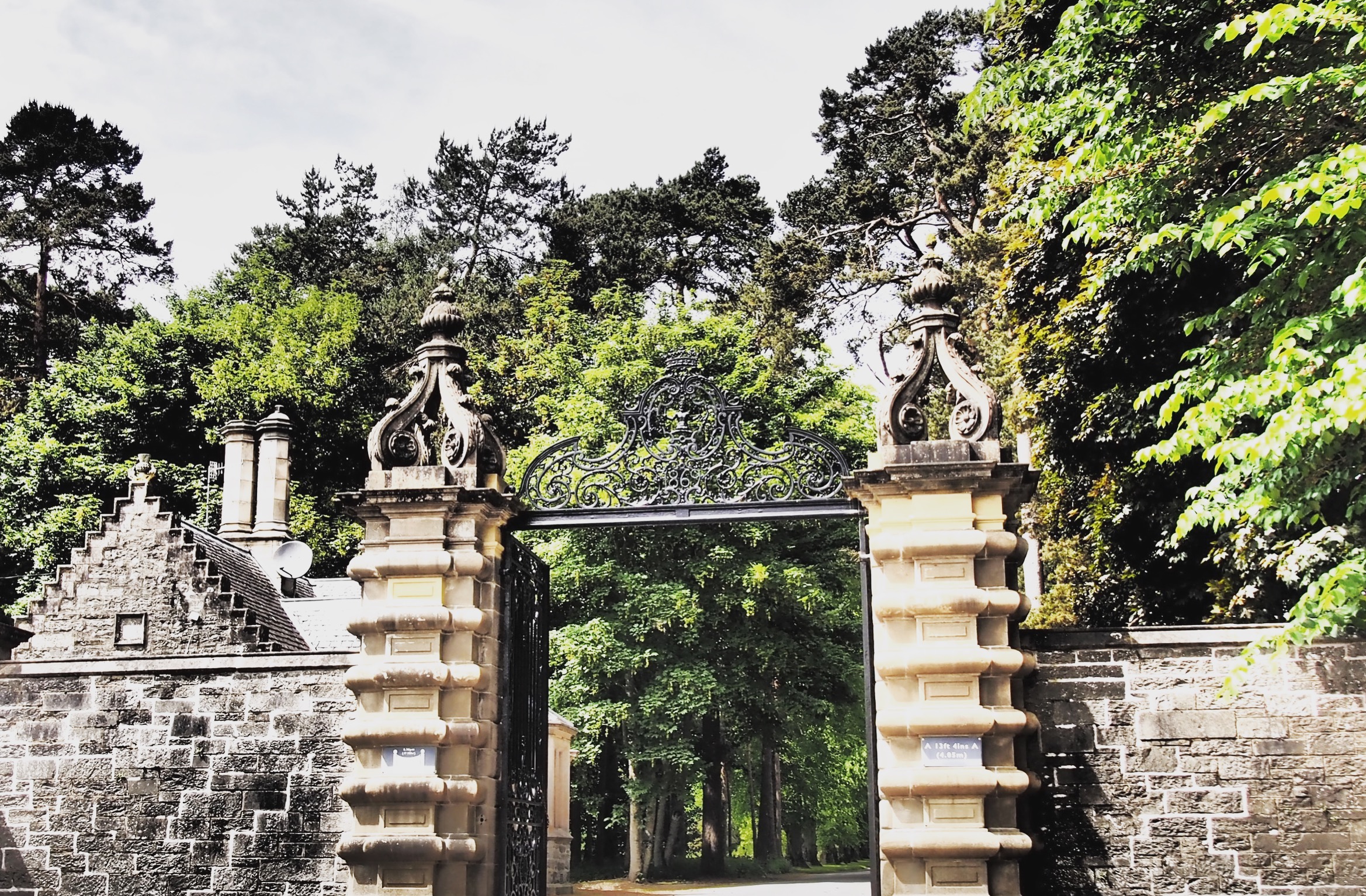 Later we moved on to the Blair Castle. The Blair Castle was the home of the Clan Murray standing in Glen Garry, a strategic position on the main route through the center of Highlands. The castle covers a huge ground – attractions include the Banvie Hall, Deer Park, Pony Trekking Center, Diana’s Grove, St. Bride’s Kirk, and Hercules Garden.

80-acre site displays aspects of Highland rural life from circa 1700 to 1930s. Through traditional and living displays, in and around original in-situ, re-erected and reconstructed buildings in differing environments. There are four sections including Aultlarie Farm, Open Air Section, Pinewoods, and Township. The museum gave me in-depth introductions of the Scottish way of life in different aspects. For example, I have learned that a ‘fank’ is a sheep pen, which is a maze-like structure that has been an integral part of the Highland landscape for over 200 years.

North-east Passage Grave and Balnuaran of Clava (a prehistoric cemetery)

It is a Neolithic Burial Caims near Culloden. The monuments were built between three and four thousand years ago. These are circular chamber tomb Cairns named after the group of three cairns at Balnuaran of Clava. From the outside, they look like a pile of rock rubble now, but it was originally dome-shaped graves with a center chamber, connected by passages so low that people would need to crawl along it.

Culloden is located near Inverness, a historic battlefield of the Battle of Culloden, the final confrontation of the Jacobite rising of 1745 and part of a religious civil war in Britain. Great Britain won the battle in the end and facilitated the integration of Scottish Highlands into the Kingdom of Great Britain.

The exhibition hall showcased the history of the battle but that was not much. Standing in the wilderness of Culloden Battlefield, the War Grave gave me chills. I imagined what the was like 270 years ago and wondered how history would change had the battle turned out differently.

I supposed no monsters in the world is as famous as the monster in Loch Ness. Although many now may believe that the monster is only a myth, the mystical Loch Ness has become a famous attraction because of it. That had me wondered, just what if, I saw a monster popping out from the water when I was on the cruise? St Columba, the Irish nobleman, is said to have seen the Loch’s elusive monster in the 6th century. But even recent detective work hasn’t proved its existence.

Monster aside, the narrow lake holds more water (it’s 230m deep!) than all the lakes and reservoirs in England. IT is also an important site that ties with the Culloden’s Battle, while the details of the Scottish past could be found in Culloden, Fort George, the Highland Folk Museum and the West Highland Museum in Fort William.

Fort William is another major pit stop in the Highlands. The Commando Memorial is nearby, which is a monument dedicated to the officers and men of the commandos who died in the Second World War. High Street is the main business area with lots of fun and restaurants. Before heading back to Edinburgh, don’t forget to stop by Glencoe, the majestic U-shaped glen (valley formed by an ice age glacier), originated by volcanic actions, and the filming site of the James Bond film Skyfall… where it was Daniel Craig’s family estate is located (Skyfall) and later it was destructed down into pieces after adrenaline raising fights.

Exploring London in a Day by Bike

By now, I am convinced that hiring a bike is the best way to…

Most Beautiful Locations in North Yorkshire

2 Must-See Places in Edinburgh for A Short Trip

7 of the Best Castles in Yorkshire You Absolutely Must Visit

If you really want to explore the history of England, and Yorkshire, then castles…

7 of the Best Family Days Out in Yorkshire

The biggest challenge while planning this trip was to find cheap accommodation in Gibraltar,…