Exploring the beautiful landscape and find out the top things to do in Queenstown.

Queenstown is probably (well, I am almost certain of it) the most beautiful city that I have been to, period. Not only the settlement, situated in a bay of the remarkable Lake Wakatipu and embraced by the rugged mountains, offers a breathtaking and picturesque existence in the South Island of New Zealand, but also its layback vibe, small-town charm, and dynamic range of adventures that captures me. The moment we drove into the city I was already blown away.

We stayed at the Crowne Plaza at the waterfront and the balcony offers an unobstructed view of the Double Cone, it was absolutely magnificent. Behind the mountain is the Remarkables Ski Area, which would have been fun to stay there during the wintertime. We visited there in Springtime – not exactly the perfect season for skiing – but we were so lucky to have enjoyed four incredible sunny days in Queenstown, including the unforgettable experience to the Milford Sound.

Queenstown is a rather small city with a population of less than 20,000, yet the city welcomed almost 3 million visitors a year (and they are expecting the number will double in a decade). The number seems overwhelming and I was not the only one shocked by these numbers. The city is overloaded and struggling to keep up with its existing infrastructure. Hopefully, the government could come up with a better plan to tackle such issues and maintain the beauty of the city.

Milford Sound – and I would want to fly, again

Milford Sound is the most beautiful tourist destination in New Zealand and it offers the best staggering coastal scenery that I have seen. Although it was not the only, I do believe the majority of tourists embark on their journey to Milford Sound through Queenstown.

It takes about 4 hours in a coach to get to the Sound from Queenstown as the road goes around the mountains. Tourists, still, get to enjoy the amazing view along the way. For me, I do recommend the “Fly. Cruise. Fly.” experience. The flight shortens the travel time tremendously and the scenery of the mountains and fjord were simply the best. So, if you ask me, and if I ever have the chance to visit Milford Sound again, I would still want to fly there. Probably during the rainy season this time so I get to see hundreds of waterfalls cascading down the cliffs from an overnight cruise.

Tours and Adventures – the variety was overpowering me!

Apart from the excursions to the nearby fjords and mountains, Queenstown is famous for adventure tourism. It has a lot of local tours and adventures that were kind of… overwhelming. As I entered the tourist center I instantly got lost by the great variety of activities that they had: rafting, fishing, golfing, trekking, skydiving, stargazing, canyoning, paragliding, sunrise balloons, glacier hiking, scenic cruise, farm experience, wine tours, helicopter ride… to something even more extreme like jet skiing, shark experience, bungy jumping, and, that’s new to me, aerobatic flying. Given that it would be very expensive, (and it might take months to try them all), we signed up for a horse trekking trip in Glenorchy. I thought about joining a scenic cruise and farm experience, but we were exhausted after all the activities and ended up going to the movies in the town center.

Before entering the city, we stopped by the Kawarau Suspension Bridge. The bridge was opened in 1881 (almost 140 years old!) and now home to the first commercial bungy jumping operation in the world. The Kawarau Center, launched by A.J. Hackett, called themselves the World Home of Bungy. I didn’t plan to jump – I wasn’t even sure I can, but I wasn’t saying that I can’t! – that day, but it was heart pounding and mind racing, just to stood by the bridge, and watched people jumping down the height of 43-meter and into the water below.

Glenorchy Horseback Riding – against the Lord of the Rings backdrop

We drove up to the head of Lake Wakatipu early in the morning. There lies Glenorchy, the gateway to Mount Aspiring National Park and Te Wahipounamu, one of New Zealand’s three World Heritage areas. 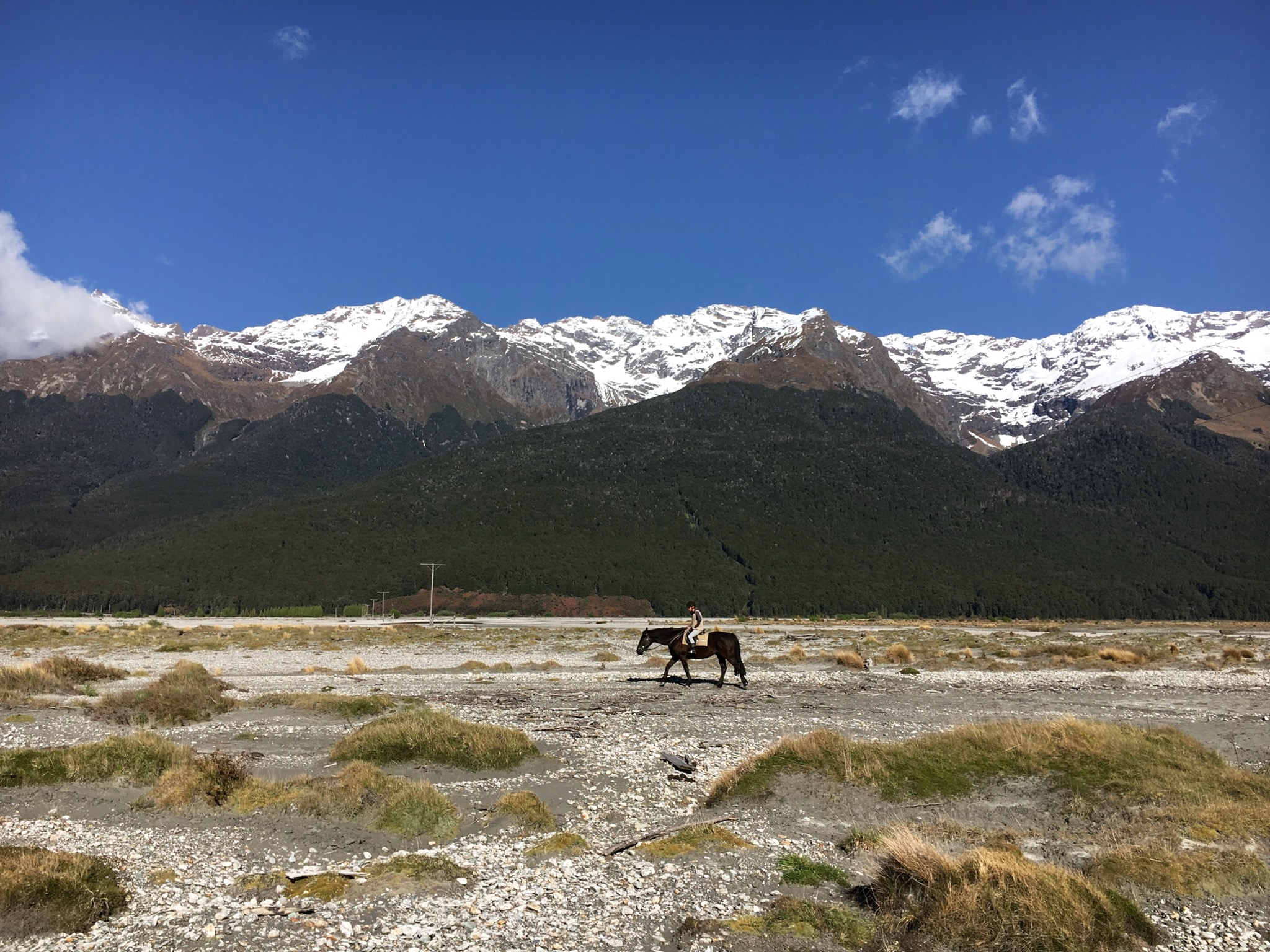 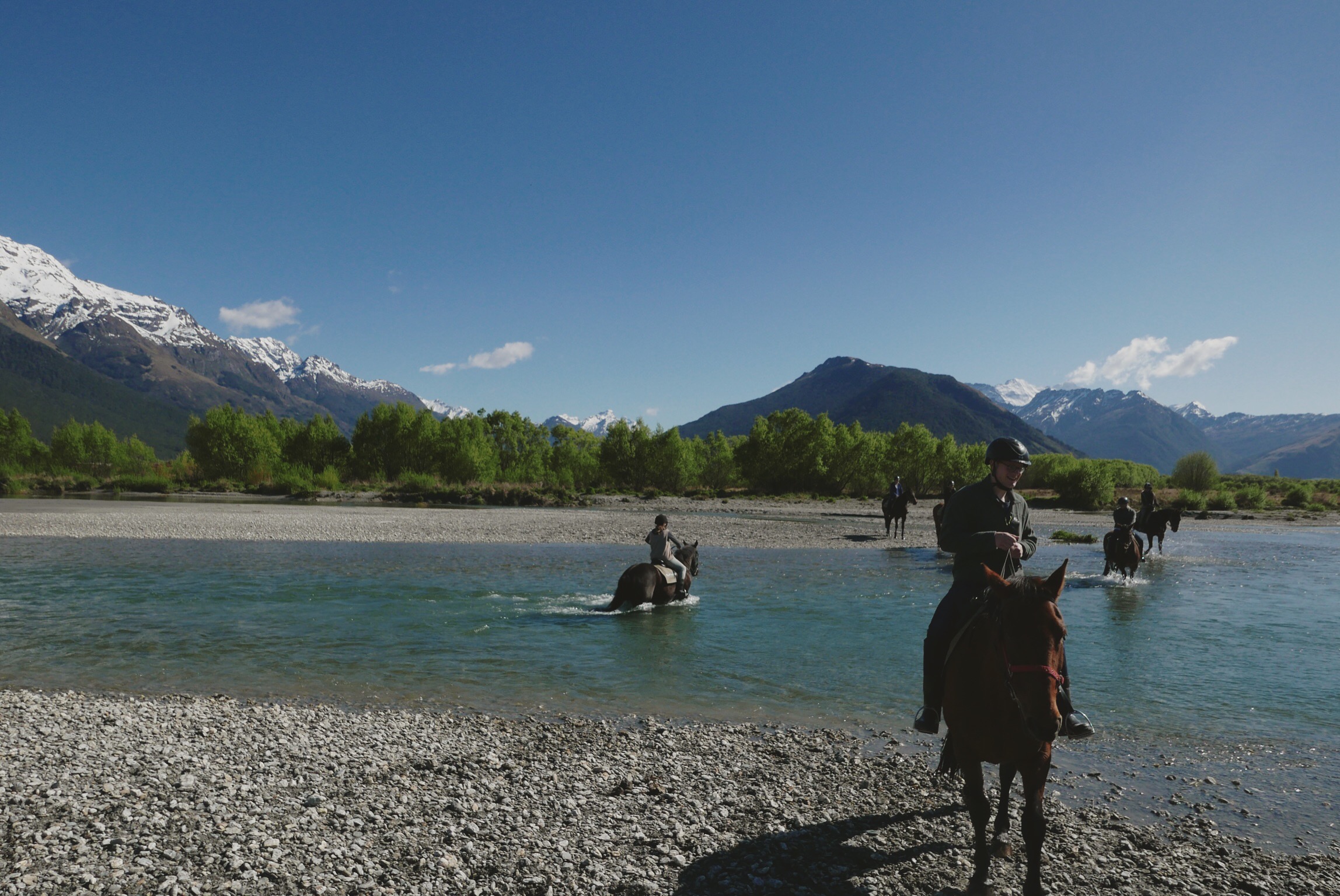 While the name of “Dart Valley” may not ring a bell to you, the otherworldly beauty and untouched qualities have been showcased to the world on the silver screen in Hollywood blockbusters including the “Lord of the Rings” trilogy and many more. So, what’s more, exciting than horse trekking through such dramatic terrains in a glorious morning? Our group was led by a team of four ladies coming from the UK and the stable has over 60 horses of various breed. They spent a lot of time with these horses and they know their character and temperament very well. We were each assigned to a horse according to our physique and personality, and immediately I felt that I had a good match.

The horses were docile and apparently, they know the environment very well, too. The 2-hour trekking passed by so quickly that I hated to say goodbye to the horses. I would recommend the 2 hours tour, just because we got to go farther (and crossing) the beautiful braided rivers and the exceptional scenery of Te Wahipounamu is just unforgettable.

Lake Wakatipu – the Hollow of the Giant 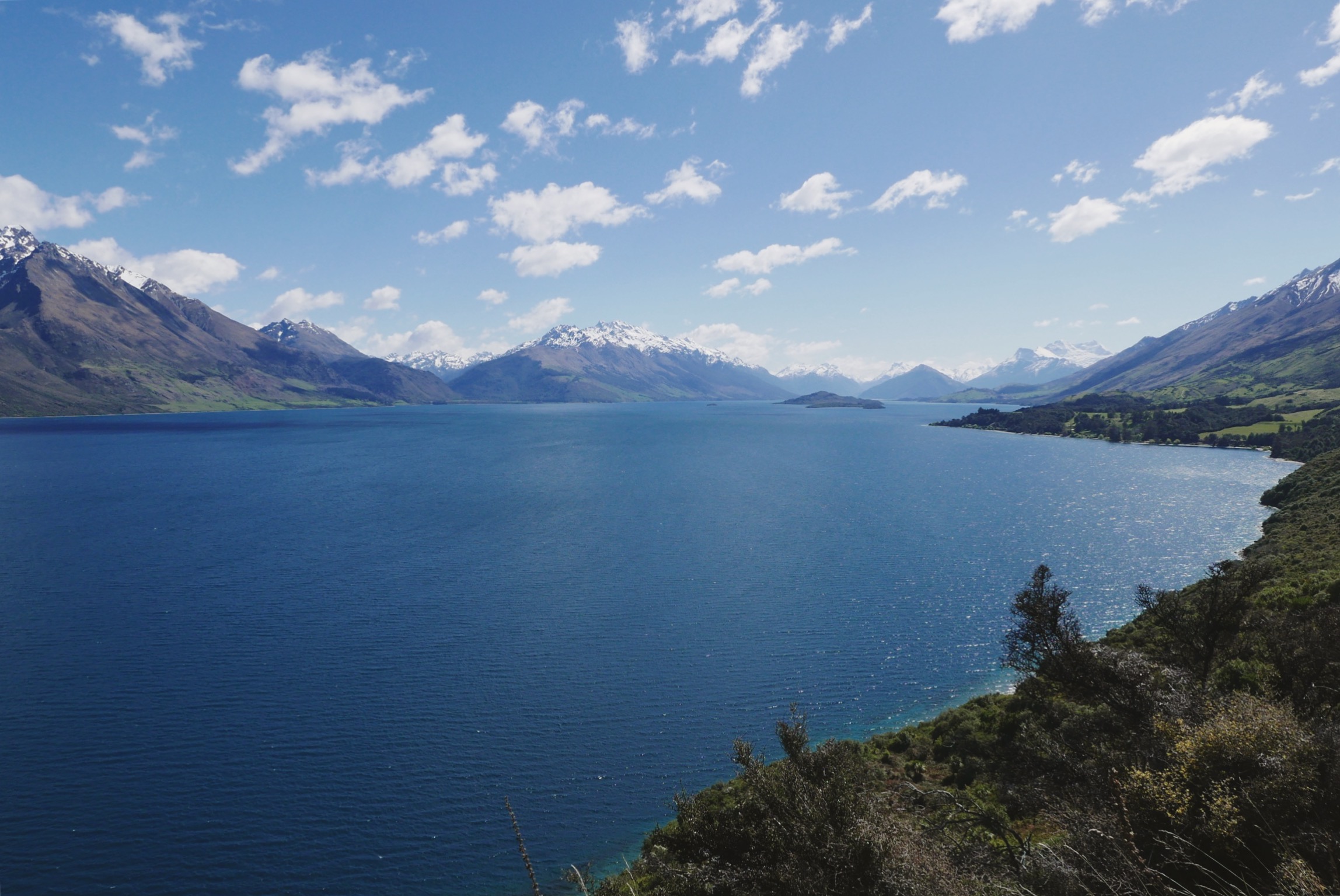 Queenstown offers no shortage of natural escapes, and the Lake Wakatipu is the focal point of these areas. The Z-shaped, 80-kilometer long finger lake is the longest in New Zealand. But why it’s Z-shaped? Scientifically, the lake was formed by glacial movement (like many other glacial lakes on the South Island). However, it was a fascinating story in Maori legend. Manata, a beautiful daughter of the Maori chief, was kidnapped by a mountain giant named Matau. In distraught, the chief offered to marry her daughter to the man who could rescue her. A young man (I supposed he is handsome, too), Matakauri, rescued Manata in the darkness, and they got married. In an attempt to prevent the giant threatening the life of his wife and the tribe ever, the hero, once again, ventured into the mountains, found Matau, and set fire on him while he was asleep. The fire burned deep into the earth and caused the snow on the mountains to melt. Finally, the water-filled up the Z-shaped gorge, supposedly where the giant laid and formed lake Wakatipu. Therefore, the name of Wakatipu is translated as “Hollow of the Giant”. I have enjoyed the view of the lake from above from the flight to Milford Sound. In fact, the scenery of the lake when we were driving from Queenstown to Glenorchy was stunning, and I think it would be nice to go on a cruise to explore the lake as well.

Weekly Market – Where the local artists come to play

The weekly Farmers Market held every Saturday right at the heart of the city, the Earnslaw Park, and it is a creative Art and Crafts Market that local artists come to showcase their products to a wide range of audience. Jewelry, paintings, homemade soaps, and handcrafted wares… I bought two coffee mugs from a local pottery artist and I love them so much. More, there were tarot readings and psychic readings booths in the market, accompanied by live music and rich waterfront views.

Arrowtown is a short drive away from the center of Queenstown and the settlement was established during the Otago Gold Rush back in the 19th-century. The gold strike led to an influx of foreign miners from all over the world – after hunting for precious metals in San Francisco (California), and Melbourne (Victoria). The historic town is located on the banks of the Arrow River and we could still catch a glimpse of the architecture and lifestyle of the gold miners at the Historic Avenue. Old English Letter Box, Post Office, Miner Cottages, Athenaeum Hall still remain; and if you would want to learn more about the history of Arrowtown, visit the Lakes District Museum, or have a walk around the Chinese Village.

I was pleasantly surprised by the wide range of food offerings in Queenstown despite its small size – I had classic Japanese meal, Indian, Thai, Korea barbecues, and Chinese food in a couple of days and they were actually quite good! Whatever you eat though, remember to save room for the legendary Fergburger. The burger joint has basically become a tourist attraction and it’s on every travel book. No first-time visit to Queenstown is complete without a bite of the iconic Freg’s. Apparently, everyone knows about it, too. There is always a long line waiting outside the restaurant and queues could get quite long during peak hours – that describes most of the store’s 21-hour day.

I had it, and yes, it was quite yummy. The beef was juicy with caramelized onion, lettuce, buns and so on. What makes Ferg’s burger so special, however, is the business philosophy. Fergburger is an almost 24-hour operating restaurant, with an amazing crew that treats others the way they want to be treated. Imagine how challenging it would be to find transient staff and consistent fresh food supply in a small resort town! They keep the price low and the welcoming vibe would just keep attracting customers more and more.

While many high-quality New Zealand brands and products are delightfully available throughout the country, Queenstown offers a compact and diverse retail environment for visitors to find them all. Popular gifts and souvenirs include Sheep oil, cream, and lotion, toothpaste, nutrition supplements, pills, or Manuka honey. Prices could be quite different from places to places, and so it might worth your while to do some comparison if you have time 🙂

What’s more kiwi than a day at the beach? Chances are that if you’re…

Being the two biggest neighbors in Oceania, Australia, and New Zealand is a world…

Lake Tekapo: Underneath the Stars

I love New Zealand, and I love that it is much less crowded than…

Yay! I overcome the Black Odyssey! Caves: dark, wet, and narrow… I dislike it,…

Road Trip in Northland, New Zealand and 12 Unmissable Things to Do

Traveling allows you to become so many different versions of yourself. The northern tip…