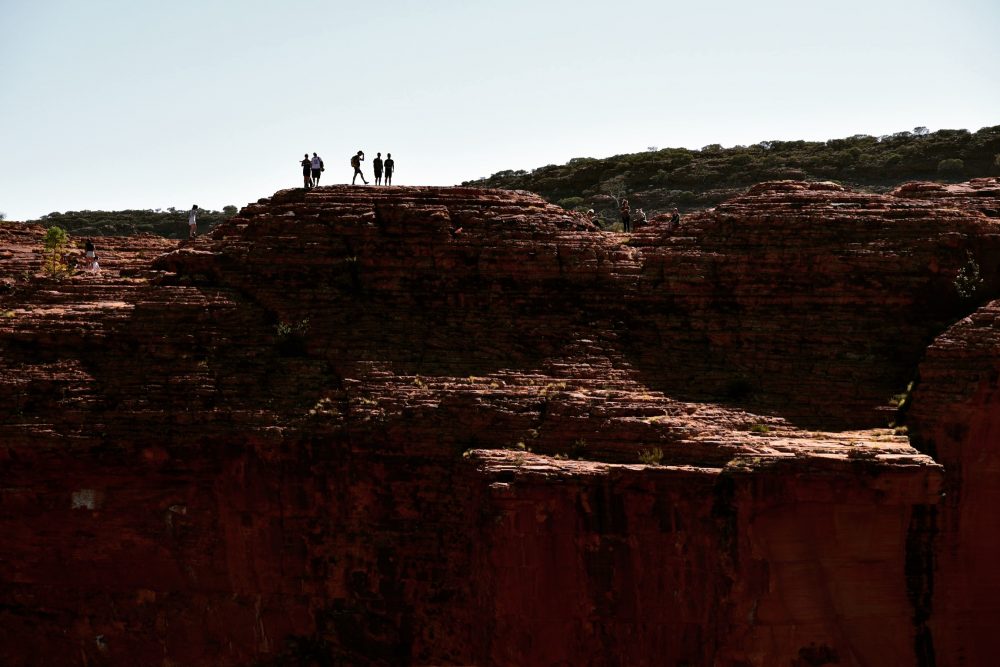 Watarrka National Park is located in the Northern Territory, Australia, and it’s in between Uluru and Alice Springs on our way back in the last day of our Wayoutback tour. It’s a magnificent geological formation and in the sense of hiking, it’s the most impressive in my opinion. For 3.5 hours, we enjoyed the breathtaking view and a geology lesson about how the wondrous mother nature.

The most visited place in the Watarrka National Park is the Kings Canyon. We started our day early while the moon was out, and it was a pleasant day with sunny weather and mild temperature. We were told the hike would be the most “challenging” walk of the tour but in fact, it should moderate for most of us in normal health conditions. The first climb was the most “challenging” part as it was steep; but once we finished that first 15 minutes, just enjoy. The Canyon has variable landscapes and sceneries with bushes and rocks that gave us a hint of the native people’s way of life for hundreds of years in this harsh environment.

So, how the canyon was formed?

What’s the difference between the canyon and a gorge (or Fjord)? One easy way to distinguish a Canyon and a Gorge is that a canyon is opened on both ends, while a gorge is closed. A canyon was original a “crack” of rocks – the wind, rain and floodwaters then began widening the deepened it’s crack over millions of years. The top part of the Kings Canyon was actually narrower than the bottom part, which means the rocks were basically hanging on the edge of the South wall. We were told not to walk on the edge of the cliff as those rocks could be loose and one wrong step might be a goodbye to your dear friends.

The park is the meeting place of desert and ranges. There are bushes and hiding places that provide wildlife food and shelter. The native people also get their materials for making tools, clothes, and housing.

At one point we were walking on the rocks that had interesting ripples on the surface. These marks are evidence that suggested the existence of a shallow lake in Watarrka millions of years ago. As the rocks were sand dunes and lake water, swept by the wind, left the ripple marks on its bottom surface. Then the climate was dry but rivers still flowed and lakes dotted the landscape… and I was talking about a million-year process in the last few sentences.

After walking on the top of the cliff we began to descend into one of the cracks and headed to a “secret garden”. Of course, it’s not much a secret anymore but it is a haven for wildlife as trees were thriving with a pool of “Evian” in this tranquil and peaceful area of the canyon. Water is life. Especially in the desert, waterholes such as the Garden of Eden have always been an important source of life for plants, animals, and people. I was told people were once allowed to swim in there but it’s now forbidden as a measure to protect the purity of the water source. Because you know… makeup, sunscreen, lotion… would tremendously contaminate the precious water.

Another spectacular, amazing, and breathtaking feature of the park was the domes. First of all, I said so because it was not just one, but thousands of beehive-like domes that were formed on the plateau like a ‘lost city’. First, the domes on top of the range started as cube-shaped blocks bounded by intersecting crack. Then, wind and rain, the most powerful craftsmen in nature, worn away the sides and top corners in the last 20 million years – and blocks have become domes separated by flat rock, and thousands of them were lining up evenly one by one on the plateau-like I wouldn’t believe.

After all, I had a great time and I appreciate the tour guide shared with us his knowledge about the environment and people in the area. He was a carpenter and then he wanted to be a tour guide. It was not easy to be a tour guide – more than a guide, but also a driver, teacher, cook, and doctor. It’s important to pack smart in the middle of nowhere!

The Outback Packing List – Don’t forget to bring these!

We left our giant luggage at the hotel in Alice Springs as it is requested to bring less due to the limited space of the bus. Apart from cash, passport, and change of clothes, we should pack lightly and effectively for three days in the wild. I have a list of something that I found useful:

Uluru: The Belly Button of the Earth

Dec 8 · 5 min read
Holy guacamole! You should check in on some of those fields below.