I love New Zealand, and I love that it is much less crowded than many cities in the “mainland” yet it is so developed and modernized. Having said that, the island had a rather native past with the Maoris. Kia Ora! It’s a warm greeting in Maori’s native tongue, wishing good health.

As we drove away from Auckland, the biggest city in the country, we headed south to Rotorua to explore the remaining parts of the North Island. Although the South Island has always been described as more geographically dramatic than the North Island (well, it’s true), the geothermal area, volcanoes, caves and rugged coastline are places that you may not want to miss during your stay in the country.

Once we arrived Rotorua, we checked in to our hotel and got ready for the next day to Te Puia. Rotorua is a small town situated by the Lake Rotorua, and its scale reminded me very much of Alice Springs in Australia. However, the view of the town is quite different. I could see smoke coming out from the nearby hot spring resort from my hotel suite’s window, and the floatplanes gliding on the lake. The floatplanes take people to the White Island, an active volcano located in the Bay of Plenty, 48 kilometers from the east coast of the North Island.

Where to eat in Rotorua?

Rotorua is small, but still, it has quite a lot of nice shops, boutiques and dining places that visitors could venture to. Our hotel provided us a map and there were some recommended restaurants: including Bistro 1284, Abracadabra, Le Café Paris, Capers, Sabroso, Pig & Whistle Pub, Indian Star, Leonardo’s, Brew, CBK, Atticus Finch, Regent of Rotorua, and Sequoia. All these places are located in the town center and could easily get to either by car or on foot. Be bold and try some of the local dishes or dessert like Pavlova – a meringue-based cake named, oddly enough, after the Russian ballerina Anna Pavlova. It was created in honor of the dancer after her tours in Australia and New Zealand in the 1920s and became one of the national dishes ever since.

Te Puia and the Whakarewarewa Valley

Te Puia is an iconic destination for visitors, consisting of the Pohutu geyser, New Zeland Maori Arts and Crafts Institute, and more. Visitors could see geysers, Maori cultural performance, live kiwi, boiling mud pools, native bush, and the National Schools of Wood Carving and Weaving. The site offers a guided tour every hour that gives a more in-depth introduction to the surrounding environment and the Maori culture.

Te Puia is located in the Whakarewarewa Valley. The name “Whakarewarewa” means “the war dance of the war parties of Wahiao” – who was a great ancestor to the people of the valley. He was a chief of Tuhourangi, a subtribe of the local Te Arawa tribe, and the Te Arawa waka (canoe) was one of the eight original canoes that brought Maori from their ancestral homeland oh Hawaiki – an island located in somewhere in Polynesia – to New Zealand. 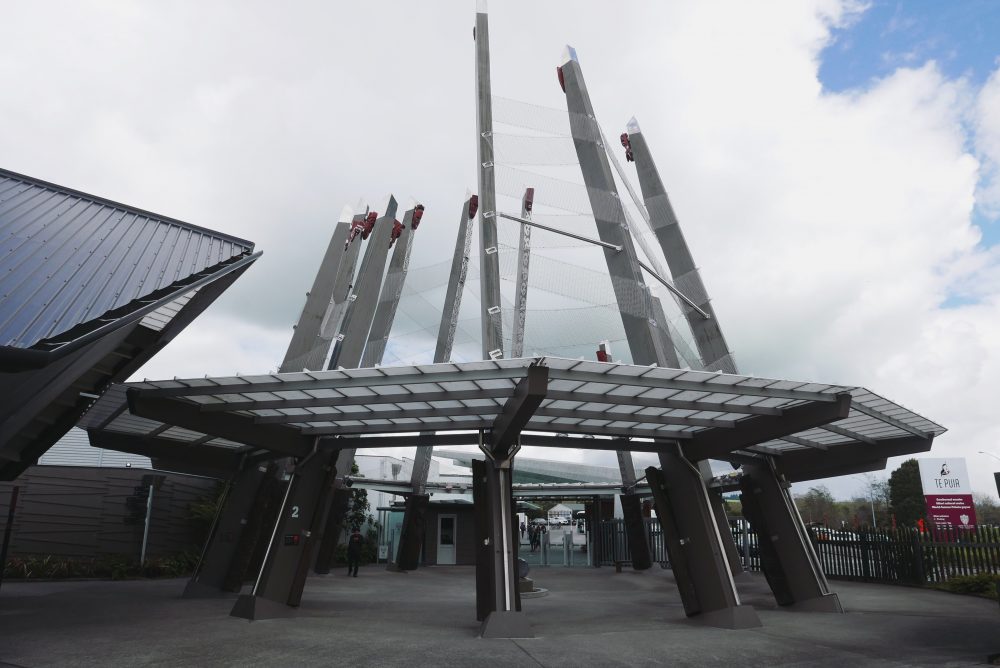 Heketanga-a-Rangi: The waharoa (entrance) to Te Puia is an impressive sculpture. Combining traditional stories with contemporary Maori sculpture, Heketanga-a-Rangi’s twelve carvings are each based on a spiritual guardian of Rotorua’s Te Arawa tribe. They are the Twelve heavens – the Maori believe when they die, they go “home” to different places and they have a strong tie and connection within the family.

The largest geyser in the southern hemisphere

There is different things that we saw in Te Puia. We came to see the Pohutu geyser, and it’s the largest geyser in the southern hemisphere. There are 6 geysers in the area, while “Pohutu”, literally means “big splash” is the focal point. 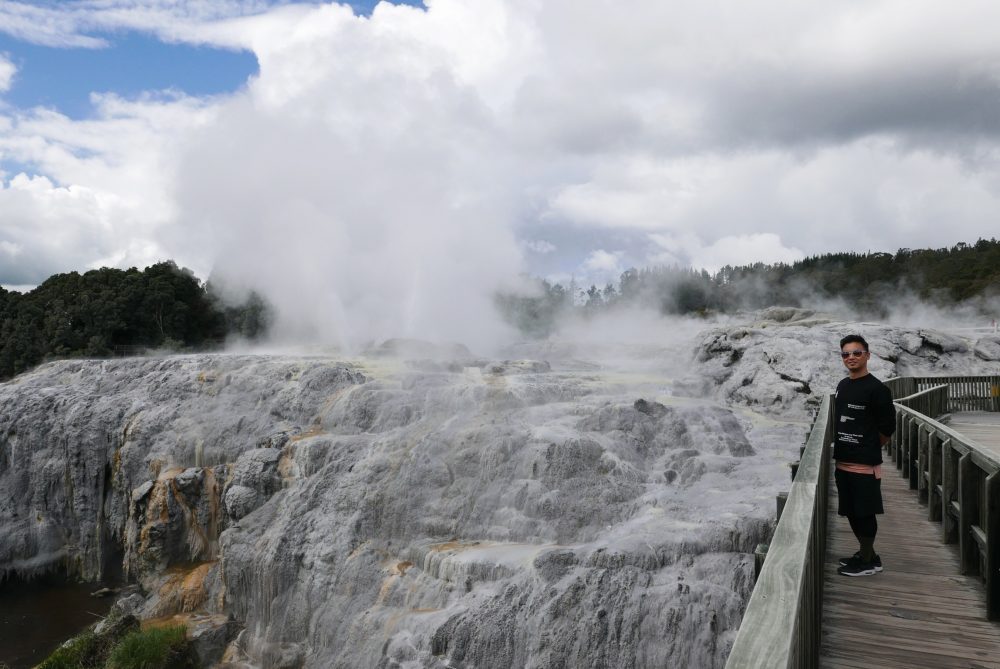 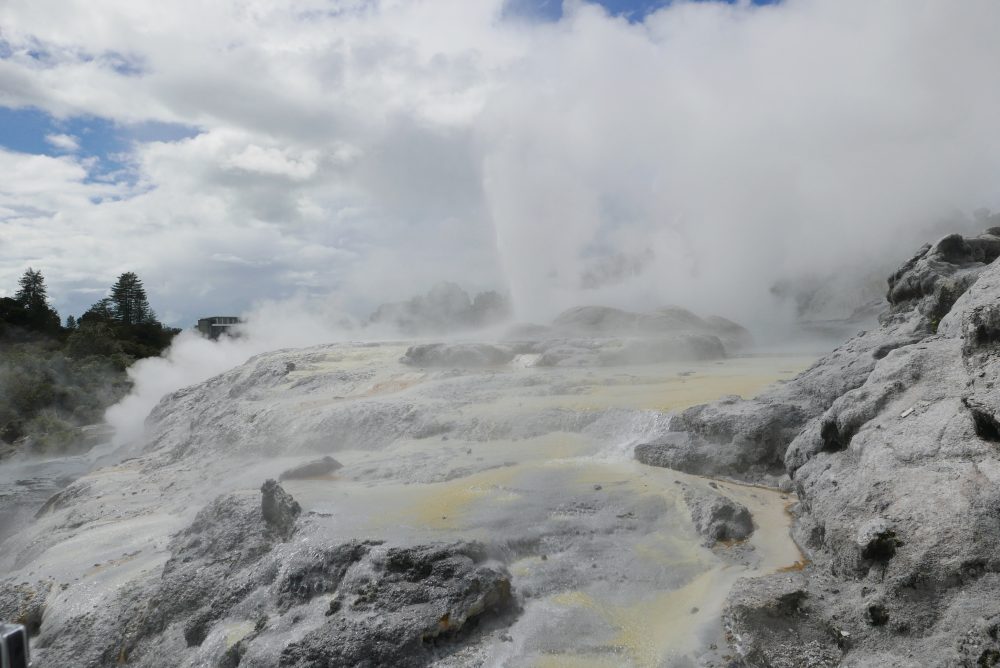 So how do geysers work? To function, geysers need a water supply, a heat source and a natural plumbing’ system of rock that can withstand high pressure. The underground chamber below a geyser fills from below with very hot water from deep inside the Earth. There are often narrow parts of the chamber where the water becomes pressurized and heated well above its boiling point. The superheated water flashes to steam in the chamber and the mix of steam and boiling water is sprayed out as a geyser. The eruption causes pressure in the chamber to be released. The chamber is re-filled with cooler water that heats up, and the process starts again. The geyser erupts once or twice each hour and same as Strokkur (the Great Geysir) in Iceland, the eruption sometimes reaches heights of 30 meters.

The natural steam vent cooker (steam box) shows how the Maori cooked and preserved food. The ancestors found natural steam vents in thermal areas and placed baskets filled with food around the vents and covered them so the hot steam would cook and flavor the food. Today, the locals still enjoy delicious fresh food cooked in this traditional Maori way. In a natural steam cooker, a piece of corn cooks in around 10 minutes, while a leg of meat takes around 2.5 hours.

Smell the Sulphur, see the mud

Apart from the geyser, the area has plenty of distinctive features in the geothermal area. From mud pool, rupture of the Earth’s crust, to thermal pool. As we walk through these spots, the famous ‘rotten eggs’ Sulphur smell is due to the presence of hydrogen sulfide in the atmosphere, released as a result of geothermal activity. Another compound associated with the geothermal activity is silica (silicon dioxide). Much of the hard mineral crusts around thermal features at Te Puia are made of silica.

The Ngamokao-a-Koko mud pool of boiling mud (with bubbles coming out) is named after Koko, a famous chief of the original fortified settlement here. The pool reminded him of the playful nature of children. Ngamokao-a-Koko translates as the “the cherished ones of Koko”. While in the Blueys, a thermal pool not far away from the mud, the alkaline water has a distinctive cobalt blue color. The pool collects water flowing out from the geysers and has various minerals dissolved in the water. The water drains into the Puarenga Stream via underground channels.

If time is allowed, the two-hour hike in the Ngararatuatara track takes visitors through lush bush part key sites at Te Puia, including the boiling Ngararatuatara cooking pool and picturesque Lake Waikaukau.

Catch a glimpse of the Kiwi Bird

There is no way coming to New Zealand not to see its national bird – the Kiwi bird. The incredible flightless birds are held in high esteem by Maoris. While Kiwi birds are nocturnal and small, they could be difficult hard to catch a glimpse of these birds in their dark enclosure.

From nature to culture

The nearby carving school is an important facility to showcase and pass on the Maori traditions and culture. The carving school teaches trainees from around the country under the skilled guidance of tohunga whakairo (master carvers). The weaving school trains students in traditional Maori weaving.

There is a range of handicrafts, including carvings, weaving, and stones, created by the artists in Te Puia in the Taonga gallery and gift shop. For me, I love the Rotorua thermal mud mask and I use it every week now!

A night in the Maori Village

After spending time in Te Puia, Agrodome and more, we dived into the Maori culture and visited the Tamaki Maori Village at night. The village is established by Tamaki brothers who had a dream to portray their culture to international visitors. Now the village is considered their sacred place and the tribe would welcome us and send out a challenge of peace before entering the site.

On arrival at the venue, nobody could enter the fortified village until the Powhiri (formal welcome) has been performed. When entering their sacred place it is customary for the host tribe to send out a challenge of peace. The warriors would go through some intimidating gestures and display certain movements with his Talaha (spear-like-weapon) until the Teka (peace offering) is placed and received by one of the visitors’ chiefs. This part of the ceremony can look quite humorous, however, it is important to respect their culture and ritual.

After we entered the village, the guests of the night were separated in groups as the “Tangata Whenua” (people of the land) demonstrated different activities such as pol twirling, hand games, and weaponry displays, and reciting chants – activities of an era gone by which have been restored by the young people today.

One of the most recognizable Maori traditions would probably be “War Dance” (sometimes we could see the dance in rugby games), as the warriors dance with fierce moves and expressions (protruding eyes and tongues, and howling) before going into battle, often intimidating the enemy away before a blow was stuck.

We were then gathered in the meeting house before dinner. The group shared a variety of Walata, Haka, Song, and Dance which tell stories of a proud race – Te Maori. We had a yummy traditional Hangi, which was cooked under the earth on hot rocks for three to four hours. It was a traditional cooking method and the rocks were heated to a white hot state with timber. The rocks were then put into a pit dug in the earth, while a basket of meat was put directly on the hot stones. Earth is then pilled quickly over the food to keep the heat inside the earth oven.

The village gave us a feel for how Maori lived before the arrival of Europeans. I had a great time seeing their traditional tools, learned how crops were grown, and the food was stored. I was amazed how much mathematics was incorporated in their weaving and craving techniques!

When I was in New Zealand I kept wondering how much the modern cities look alike to any of those in Australia and Canada, it was the traditional culture in countries that make the difference. The Maori shared their knowledge and interactively introduced to us their history and culture. I enjoyed a lot and the next stop, Canada and Hawaii!

What’s more kiwi than a day at the beach? Chances are that if you’re…

Being the two biggest neighbors in Oceania, Australia, and New Zealand is a world…

Lake Tekapo: Underneath the Stars

Yay! I overcome the Black Odyssey! Caves: dark, wet, and narrow… I dislike it,…

Road Trip in Northland, New Zealand and 12 Unmissable Things to Do

Traveling allows you to become so many different versions of yourself. The northern tip…

Exploring the beautiful landscape and find out the top things to do in Queenstown.…

Dec 8 · 9 min read
Holy guacamole! You should check in on some of those fields below.