As the plane was touching down at the airport and I still couldn’t believe that I was in Cape Town. The city is constantly featured and named as one of the most beautiful cities in the world yet I felt it is quite disconnected from my world. I was excited and curious to explore the city and then I fell in love with the incredible landscape and natural beauty. The city’s urban area is embraced by mountains and the Atlantic Ocean – but before we drove to the Table Mountain, Simon’s Town, and the Cape of Good Hope, we settled down at our apartment first (with a gorgeous view of the Table Mountain!!) and took a walk in the city. Although there were concerns about safety for tourists in the city of Cape Town, we had a pleasant time and the city actually has an interesting history, vibrant art, great markets, authentic dining experience, and exciting coffee scene.

Our apartment is located very close to the intersection of Strand Street and Buitengracht Street which are the two of the busiest avenues in the city center. Shopping arcades, historic landmarks, and many tourist attractions are located within Strand Street and Adderley Street, while restaurants and shops are lined up along Long Street and Bree Street. Cape Town’s city center layout is like grids and so it’s very easy to navigate, especially with the gigantic Table Mountain in the background. Besides, there’s a South Africa flag painted on the wall of a residential building above Mcdonald’s at the far end of Long Street, it would be hard to be mistaken that I was in South Africa! 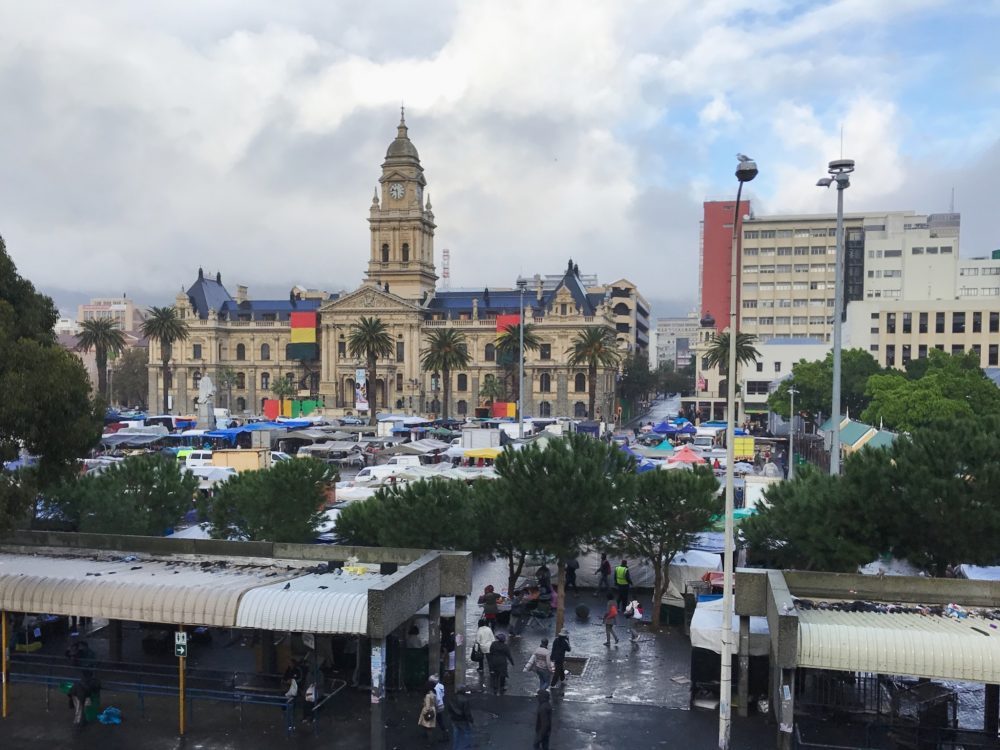 The Grand Parade is the heart of Cape Town so let’s begin here. It is the main public square located in front of the City Hall, and the Castle of Good Hope and the Cape Town railway station are nearby. Today, the square is a market and parking area where the local hustling here to catch a train, or buy groceries. Back in the 90s, it was the first place where Nelson Mandela addressed South Africans following his release from prison and election as president in 1994. Be careful though, this is also the place with a higher crime rate.

The Castle of Good Hope is a historic site that dates back to the 17th century, of which it was a bastion fort built by the Dutch East India Company back in the colonial era. The castle is the oldest existing colonial building in South Africa, and it has a distinctive pentagonal shape – which was also used on South African Defence Force flags!

The Company’s Garden is a park and a collection of heritage sites in central Cape Town. It was a beautiful green space developed by the early European settlers (during the colonial times) and it’s a cluster of the city’s important offices and churches. Luckily, the park is protected through the chaos and many botanically and historically valuable plants and features remained. There, you will find the oldest cultivated pear tree in South Africa dated back to the 17th century, a historic rose garden, a European style fish pond, an aviary, lawns, and gardens together with historic statues and memorials.

Starting from Groote Kerk, move your way up to Iziko Slave Lodge, Saint George’s Cathedral, and walk through the Government Avenue under the trees where you could see the Parliament Post Office, South African National Gallery, Jewish Museum, Iziko South African Museum and the Cape Town Holocaust Center in the end.

Iziko is an isiXhosa word (an official South African language) means “hearth”, it embodies the spirit of a transformed institution and to pass on to generations.

Greenmarket Square is located along the Longmarket Street, right in front of the Central Methodist Mission. The small, historic square was established in 1696 and now it’s surrounded by beautiful European style buildings. The square has served as a slave market in the past, and today it’s transformed into a flea market trading mainly African handicrafts, souvenirs, and fresh produce. 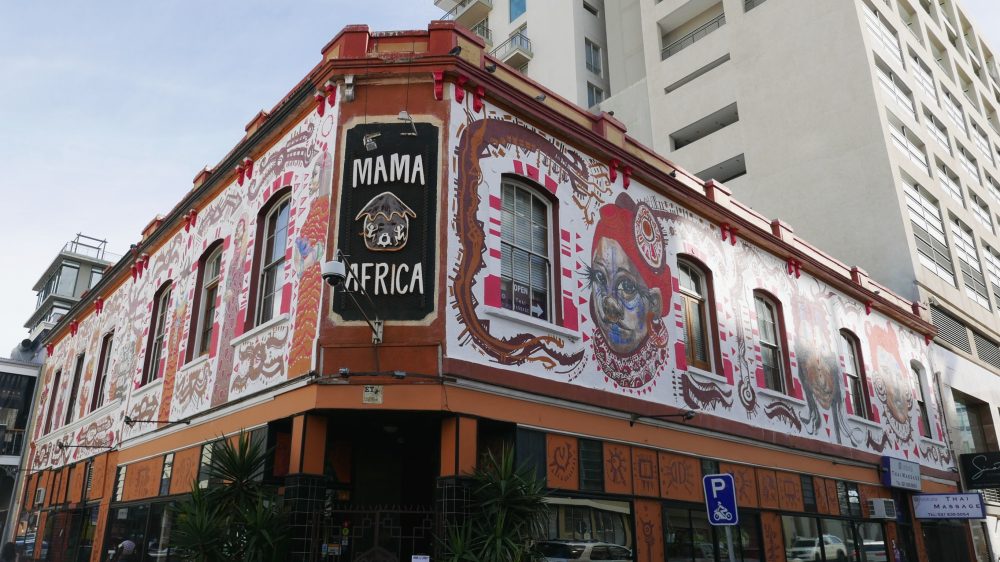 Well, I have talked about the food in Cape Town – and we went to Mama Africa on Long Street. Opened in 1995, it is a hearty traditional food in a colorful, rustic setting with an eclectic mix of bands and drummers. Their menu of African dishes is quite exciting: from Mozambique Chicken livers, vegetable samosas, crocodile, game kebabs as starters, to lamb’s curry, bobotie, Moroccan lamb pot roast, Karoo lamb chops, as Zimbabwean dovi (chicken) as main courses. If you are daring to try their wild game dishes, there are springbok steak, kudu steak, ostrich steak, warthog, to a mixed grill of everything!

Long Street is filled with restaurant and if you have more time, I would recommend you to explore other places like Fork Tapas & Pinchos Bar, The Africa Cafe, and more!

It was interesting for me to know that Cape Town has a trace of Malay and Muslim heritage and it was showcased by a line of colorful houses in the Bo-Kaap neighborhood, which was built on the slopes of Signal Hill in the mid-18th century and a former township known as the Malay Quarter. These houses are the last remnant of Walendrop, an early residence in what would become the Bo-Kaap area. The museum exhibits photos of the lives of the Muslim community as slaves from the 18th to 19th century.

Why District 6? It is a former inner-city residential area and over 60,000 its inhabitants were forcibly removed during the 1970s by the apartheid regime. it was named District 6 as the 6th Municipal District of Cape Town. During 1966, the government declared the area “the white-only area” and about 30,000 inhabitants were immediately affected and evicted from the district. Today, the area is re-opened and established itself as an art and theatre district with galleries, graffitis, and jazz.

Look for Mandela’s graffitis, and there is a giant yellow frame that captures the Table Mountain. 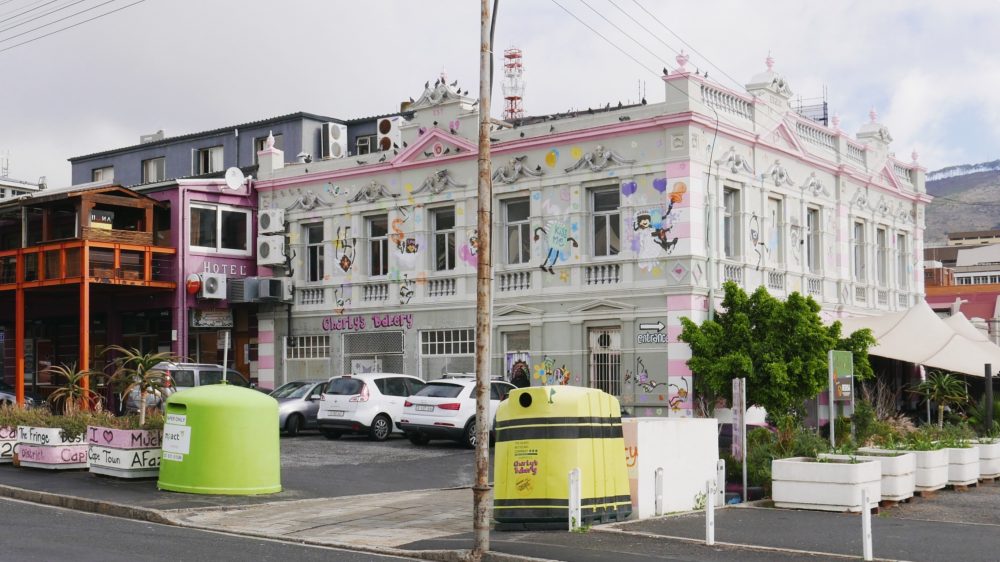 The Charly’s Bakery is on the opposite side of Mandela’s fresco and it’s a family-owned premier cake bakery in town specialized in wedding cakes. The building has an eccentric vibe and outdoor sitting, while tourists may not be looking for a wedding cake – they have a series of artisan cupcakes from Elmo, minions and more!

I like coffee and so does Cape Town! There are quite a lot of cafes and coffee shops in the city and it has an exciting diversity. For example, I love the Origin Coffee Roasting and Truth Coffee and both of them are located within walking distance of my apartment. It was nice to enjoy a freshly ground brew with avocado, eggs, and toasts in the morning. In Origin Coffee Roasting, they have a long list of coffee for me to choose from: from Rwanda, Tanzania, Panama, Papua New Guinea, Mexico, Guatemala, to Colombia… each of these coffees were indicated their flavor, acidity, body, and roast. They also recommend the best suitable way of brewing the coffee, from espresso, plunger, siphon, pot, AeroPress to pour over… the servers are friendly and they have a good knowledge about coffee, I learned from them whilst enjoying my coffee and it was a great experience when I was in town.

V&A Waterfront is a premium shopping complex in the city which boasts hundreds of retail outlets and dozens of restaurants, hotels, and tourist attractions.

Apart from the city center, the upscale shopping area is generally safer to freely move around. Besides, the area has a great view of Table Mountain from the waterfront!

The entire complex is not small with malls and outdoor areas. There are so many to see and do in between the marina and vibrant malls – SA Rugby Museum, Two Oceans Aquarium, Chavonnes Battery Museum, Seal Spotting, Cape Wheel, Jolly Roger Pirate Boat… and the list goes on. The area was developed in 1988 and it’s a comparatively safe area to hang out at night. Apart from the shopping and dining experience, there is an abundance of leisure activities from cycling and jogging routes, water sports, and a weekly farmer’s market, to live music in the amphitheater. Even if you are not into any of these landmarks or shopping, take a walk on the scenic Boardwalk Path and take a breather when soaking up the beauty of the Atlantic Ocean, and possibly even spotting a frolicking seal or a pod of dolphins.

Don’t forget to look for one of the giant yellow frames that is an iconic photo spot to “frame” the Table Mountain during sunny days!

There is a wide selection of dining places in the complex and I would recommend Karibu Restaurant and Quay Four. The Karibu Restaurant is yet another African restaurant where you could venture some authentic African dishes, and the Quay Four has oysters and quality seafood at a very reasonable price.

Clean, sleek and a modern circle. I was talking about the Cape Town Stadium located on the waterfront. Built for the FIFA World Cup in 2010, the giant structure is prominently visible all the way up to the Table Mountain. Don’t forget to stop by and admire the modern architecture on the way to visiting the V&A Waterfront!

Table Mountain, A Gift to the Earth

Cape Town: a picturesque South Africa coastal city with a lot of charm and…

Cape of Good Hope and Pinguins at Boulders Beach: The Lands End in Africa

Another day, another adventure. In 1488, Portuguese explorer Bartolomeu Dias sailed around the Cape…