Being the two biggest neighbors in Oceania, Australia, and New Zealand is a world of difference in terms of its landscape and natural wonders. Australia has amazing beaches, koala bears ?, crocodiles, the Uluru, and a habitat ranging from tropical jungle to desert. New Zealand, on the other hand, has volcanoes, glaciers, geothermal areas, fjords and sounds, kiwi birds…; and so when I was in New Zealand, I met with quite a lot of Australian folks. For anyone who travelled to New Zealand would tell you the same thing – the landscape in South Island is much more dramatic; the Southern Alps is a dreamy place for trekking, wild camping, star gazing, glacier walking… that’s why I decided to spend some time on the North Island first before venturing to the south.

Flying to the South Island from the north in New Zealand was pleasurable as we were passing the Kaikoura Ranges. The two parallel ranges of mountains could be seen from a great distance, including the southern coast of the North Island. I was on a plane from Rotorua to Christchurch in October and I was already stunned by the marvelous landscape of the South Island before landing.

Christchurch is the third-largest city in New Zealand and the largest in the South Island. It’s known as the “Garden City” due to its warm weather, abundant sunshine, flower beds, and an expansive Botanic Garden. On 22 February 2011, the city center of Christchurch was devastated of being the epicenter of a 6.3-magnitude earthquake. Although it was not as intense as many other earthquakes that happened, it was close and shallow (merely 5 kilometers from the surface) enough to cause serious damages. The CBD (Central Business District), including the city’s landmark Christchurch Cathedral, collapsed and left in shambles. In the past 5 years, there have been a lot of discussions about how to make the city an exciting and fabulous place again. The revival of the city also faced challenges due to Soil liquefaction and many of the buildings have no choice but to be rebuilt gradually within the public exclusion zone (CBD Rebuild Zone).

It might take a long time for the restoration work to be done (the alpaca farm Cheryl it might be 20 years!), and lots of tourist activities are basically suspended these years. However, it could be hard for tourists to avoid Christchurch completely as it’s still the hub for flights to enter the South Island, and the starting point of the TranzAlpine Train and Coastal Pacific Scenic Train. Besides, the surrounding towns in the Canterbury region remained intact, such as Akaroa and Kaikoura; and there are several places in the city that worth a visit.

Although we drove from the alpaca farm to the CBD, it’s a nice way to get around in the city center by taking the Christchurch Tramway. The Tramway has 17 stops and covers all the main sites in the historic CBD. For a day-pass of NZD$20, the tourist could hop-on-hop-off for 24 hours at their own pace. While the humorous and knowledge tram driver would give rather entertaining commentaries as we traveled around the city.

There are two tram lines running in a circle so it’s not exactly in a sequence, but they are numbered from 1 to 17, which made it easier to navigate.

The city center is not big which could have been done on foot. As we were exploring the city in the tram, we saw construction sites everywhere. Now this area is rather quiet while most of the commercial activities seem to remain in the less affected areas like Lincoln Road or Riccarton Road. We wondered if there would be enough construction workers for so many projects happening at the same time. Not only the buildings above ground needed to be rebuilt but also the pipework underground. 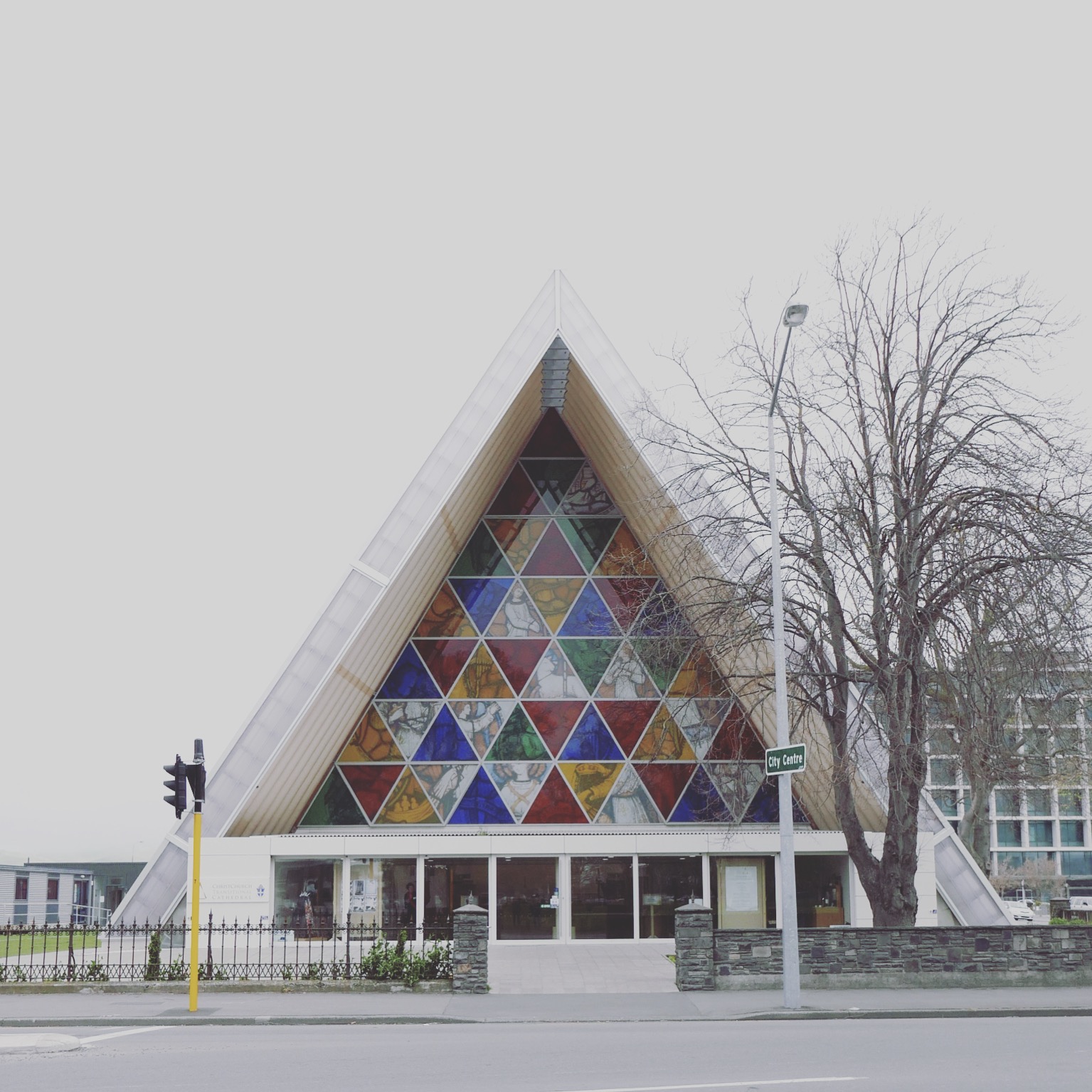 The Cathedral Junction is the starting point of the tramway and the Transitional Cathedral, or Cardboard Cathedral, is a 5-minute easy walk across the Latimer Square. Acted as a transition of the Christchurch Cathedral, the structure is designed by Japanese architect, Shigeru Ban, who is notable for his innovative work using recycled cardboard to quickly and efficiently create shelter for disaster victims. The Cardboard Cathedral was also made of cardboard, with wood and glass, and the triangular pieces of stained glass are really something to see.

The Christchurch Cathedral was significantly damaged and I couldn’t even recognize it when I was first walking past the site. Survived numerous earthquakes over the last hundred years the tower was finally demolished in 2012, due to the core of the tower was seriously damaged after the 2011 earthquake. It was later the Anglican Church decided to demolish the building and replace it with a new structure but came to a halt when various local groups opposed the idea and brought the case to court. While the judgments have mostly been in favor of the church, no further demolition has been taken place since the removal of the tower in early 2012; and now the fate of this landmark remained unknown.

The historic mill on the island was adorned by the beautiful cherry blossom during springtime!

The city is filled with modern art and the Re:START Mall is a shopping area with shops and delis that operate in containers. It is also closed to the Cashel Street Mall, iconic Ballantynes Department Store which survived for generations and the main pedestrian zones in the city center. Visit the Quake City Museum as there will be more information about the earthquake.

After passing the developing district of Manchester Street and High Street – Punting on the Avon is one of the must-dos in the city of Christchurch! While there were originally two locations to hop on the punt and now only begins at the historic Antigua boat shed on Cambridge Terrace.

Afterward and tram went straight through the Worcester Street to the Botanic Garden before turning it right to the Hagley Park Corner and returns to the Cathedral Square. We disembarked for the Canterbury Museum and the Botanic Gardens. I got my favorite black coffee at the ilex Café, and appreciated the beautiful flower beds and bushes in the garden as I met some barn birds freely roaming on the lawn and saw cherry blossoms during its full bloom!

For those who didn’t want to walk, it is possible to enjoy the entire garden in an all-weather electrical vehicle.

Dec 9 · 1 min read
Holy guacamole! You should check in on some of those fields below.